From the popular adventure game "Okami" comes a DX Nendoroid of Amaterasu's form from 100 years ago, Shiranui! The Nendoroid has been carefully created under the supervision of character designer Kenichiro Yoshimura.

Both a gallant standard expression face part and a charming open-mouthed expression face part are included. Optional parts include Shiranui's Celestial Envoy Ishaku and the Reflector Solar Flare used in the battle against Lechku & Nechku. The DX Nendoroid also comes with the Glaive Thunder Edge, the Tundra Beads Rosary and a howling face part, allowing you to create even more poses and situations. Be sure to add Shiranui to your collection! 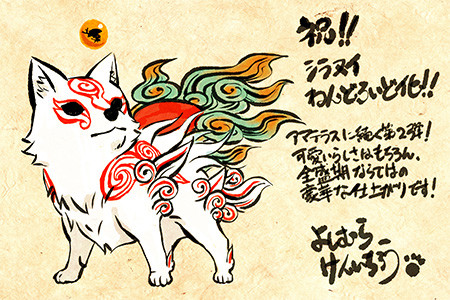 Celebrating the creation of Nendoroid Shiranui!
The second after Amaterasu! Not only is the Nendoroid cute,
but the special design from Amaterasu's heyday has been recreated so gorgeously too!
-Kenichiro Yoshimura

Purchases of Nendoroid Shiranui DX Ver. from the GOODSMILE ONLINE SHOP will include a Sparrow and Food Dish as a bonus!