The statue is based on the traditional Chinese stage play, "Prince Lanling in Battle". This play was created 1600 years ago and is one of the oldest recorded Chinese plays. In 2020, music producer Liu Qingyao and Chinese opera and dance theater performer Wang Jianan recreated the song using various instruments. It has already been viewed more than 10 million times online. Rocky L took inspiration from the performance and created the prototype that became this figure.

This is the first appearance of a male character in the Elegant Beauties series. This statue is divided into two layers; the bottom of the figure features an elegant and mysterious atmosphere with a man performing the song, represented by the heroic Prince Lanling above the cloud. While the top and bottom of the figure feature very different atmospheres, they work in harmony like tai chi. The figure simultaneously shows strength and beauty.

Prince Lanling's armor is created with realistic paintwork to capture the intensity of the battlefield. The clouds are made with painted translucent parts, providing a dreamlike look.

Purchases of the first run of INFINITY STUDIO Elegant Beauties Series - Prince Lanling in Battle will include a Masked Head Part as a bonus! 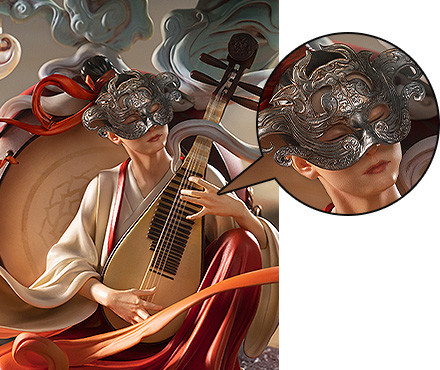